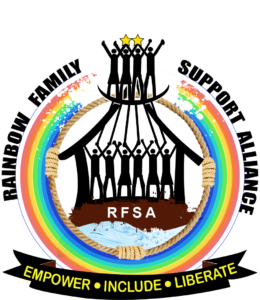 Rainbow Family Support Alliance (RFSA-Uganda) is an NGO fighting discrimination and violence of LGBT people in their families and render support to LGBT victims of family violence and banishment. The organisation was founded by a gay man who was a victim of family violence and banishment because of his sexual orientation, and he decided to start an organisation that supports LGBTI people who are being thrown out of homes by their parents and relatives.

Before RFSA-Uganda was founded, there was no LGBTI organization in Uganda committed to solving discrimination of LGBTI people within families and supporting them, but incidences of family violence were frequent. RFSA-Uganda was formed, to fill that gap

In Uganda, in churches, mosques, villages and families, people are taught that LGBT people are evil, devils, a curse from the gods. LGBT people are isolated, dismissed from schools, abused and severely beaten at home and in socializing spaces, banished from home, denied treatment in medical centers, and chased from jobs. Many LGBT people live in hiding and many commit suicide.

In 2017 and 2018, RFSA-Uganda received 188 requests for emergency evacuations due to LGBT people being beaten, denied food and education, locked in houses, etc.

This year, the Circle is supporting RFSA-Uganda to implement a range of activities:

We are proud to be able to support RFSA-Uganda in their important work. Read this for more information.