TransFuzia has been changing lives for transgender and intersex people in Slovakia since 2010. They are a refuge for individuals, setting up support groups and working to change the medical care and the legal situation.

There is still much improvement needed for transgender and intersex people in Slovakia. Despite the fact that transgender people can change their name and gender under certain conditions, misunderstandings, discrimination, and social exclusion are rife. TransFuzia is the first and the only transgender organisation in the country and they have been important door-openers; as examples, they started the first information website, have built a sense of community, and offer counselling.

Romina Kollarik, TransFuzia’s Director, is one of only a few openly transgender people in Slovakia. She continues to do her important work, despite many negative responses. She says: “The problems of almost every individual who contacts us can only be solved by system changes, legal, social, public opinion. I have to fight for those changes, for a better future for transgender and intersex people in Slovakia”.

After the most recent internationally funded project ended some time ago, TranFuzia did not have any money left to do the work. Finding donors in their own country is near impossible; LGBTI topics are still taboo. And because Slovakia is an EU country, international funding is also problematic. Many donors have the mistaken belief that because it is an EU country, there are not many issues. Romina and a few co-workers and volunteers continued the work without money, because they did not want to let down the people who were depending on them. However, it was becoming increasingly difficult to sustain the organisation under these circumstances. 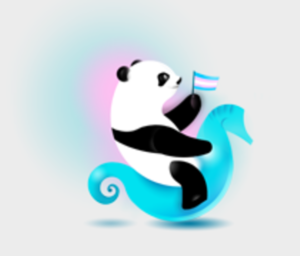 With the support of the Give a Damn Foundation, TransFuzia can continue their crucial work for a year! We are happy that we can contribute to almost every aspect of their work, including counselling, community building, media performances, and training of professionals. When we spoke to Romina in August 2017, she said that the first months after we gave the grant have been very successful; much has been accomplished and there has been a large increase in the number of volunteers. Financial means and more people who can contribute, means increased opportunity to push for the systems changes that are needed to enable transgender and intersex people to be themselves in Slovakia.